Our Friend Gretchen Is Insistant!

Willie, he acts real smart, but sometimes he really puts his foot in his mouth. Here, he thinks Gretchen our friend, is innocent. BUT, his spelling isn’t the greatest. Daddy had to correct this posting for him. Gretchen belongs to daddy’s friend Big John, of Big John’s Motor Company. No, he doesn’t sell Mercedes or Porsches, though he did once have a beat up Jaguar on his lot. Daddy says he sells crap boxes (crap isn’t the word he used), but that’s good ’cause Big John always has a bargain if you want a cheap car. He is a nice man, and loves his babys. It seems that the mailman or some other criminal came in Big John’s house, and got in Mrs Big Johns wife’s lipstick. Cause Gretchen swears she didn’t do it. 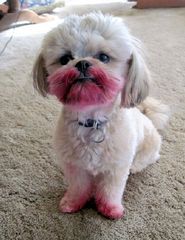 Tagged In:big john-gretchen-inoccent-lipstick
Are We There Yet Daddy? Bentley Has A Setback

The Babies in the Car VIDEO

Daddy takes a lot of pictures of us in the car, and we go a lot in the car. He ties our leashes back. If you cant see the video below, watch it on youtube. This video shows us minding our manners and waiting to get out of the car until daddy says go. Cody […]

Bentley loves toys. Bentley is our newest rescue, and he’s available for adoption. He sure is sweet. He’s potty trained, loves to sit and fetch. Check out the rescue site to see about being his new parent. If you cant see the video below, watch it on youtube. You can find more pictures and videos […]