NEW RESCUES -HELP ME NAME THEM

HELP ME NAME THE 2 NEW RESCUES2! Such a sad story. My neighbor called me at work Friday morning and said my dogs must have gotten out; I let him know they were with me at work. He said there were 2 Cavaliers rolling in a ditch a block from my house. He said they had no collars or tags. I assured him they were not mine, but asked him to please pick them up and take them to my house, and I gave him the gate code so he could put inside the fence. I then sent Rodney home to get them. He brought to work, but they looked terrible, and smelled so bad no one could stay around them. We made arrangements to get them washed, and they were off for new doo’s. It was sad, they were so flea infested they actually had skin that was bleeding. No wonder they were rolling in the ditch. We’ve taken them to the vet today, they are ok, no heartworms, over weight some, but tails in the air and really sweet. They have minor ear infections, hair trim short. They were obviously dumped form a puppy mill. Both females both have had puppies recently. The mill was done with them, so dumped them. Today the normal groomer came (everybody gets a new doo every Friday, ’cause you never know when they might need to conduct a parent interview.

Yellow harness, weighs 29 pounds, about 8 years old, needs dental, won’t be ready for adoption for some time, needs to be spayed, but is very sweet. Somewhat shy. WHAT SHOULD WE NAME HER? 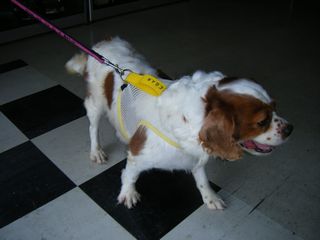 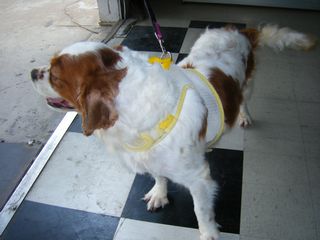 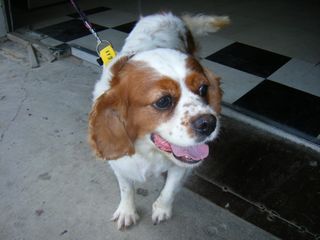 Black w/colors harness, weights 24 pounds, about 5 years old. May need minor dental, also needs to be spayed. Plays and acts like a puppy, very outgoing. VERY SWEET, WHAT SHOULD WE NAME HER?

Rescue has to put them in the system, vet referred to them as more red and less red, but we know that won’t do. I need names to put them in the system, so send me your best ideas Saturday and Sunday, Monday morning (June 14) I will chose some names, and they will be headed to their new life! I likely won’t keep them, other fosters will take them next week, and work through getting them ready for adoption; I would guess at least 4 more weeks. Thanks for your help!

The Babies in the Car VIDEO

Daddy takes a lot of pictures of us in the car, and we go a lot in the car. He ties our leashes back. If you cant see the video below, watch it on youtube. This video shows us minding our manners and waiting to get out of the car until daddy says go. Cody […]

Bentley loves toys. Bentley is our newest rescue, and he’s available for adoption. He sure is sweet. He’s potty trained, loves to sit and fetch. Check out the rescue site to see about being his new parent. If you cant see the video below, watch it on youtube. You can find more pictures and videos […]